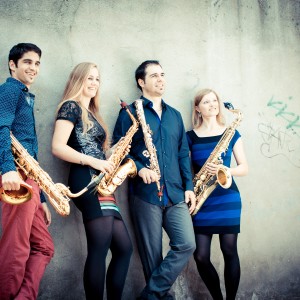 Melisma Saxophone Quartet is a young and international ensemble. The quartet was formed in autumn 2009 and has distinguished itself as a very talented young ensemble with great potential. In May 2011, the quartet reached the final of the 7th Osaka International Chamber Music Competition in Japan as the first Dutch ensemble ever, and received honorable mentions for their performances. Melisma’s repertoire encompasses many different styles and genres. The traditional repertoire for saxophone quartet is fundamental to the group, but the quartet is also curious to find new repertoire and they often do their own arrangements. Melisma Saxophone Quartet has performed in major concert halls in The Netherlands and abroad, for instance in The Manuel de Falla Hall (Madrid, Spain), Izumi hall (Osaka, Japan), Orgelpark (Amsterdam), and at major festivals e.g. The 1st Bach Festival in Dordrecht 2010 (NL), Grieg Festival (Norway), Davos Festival (Switzerland) ect. The quartet has also played live on the Dutch national Radio 4 directly from the Spiegelzaal in Concertgebouw (Amsterdam). More info www.melismaquartet.com

Saxyon is a new duo formed by the two young musicians Ellen Zijm and Marijke Schröer. Together they decided to search for the unknown possibilities of the unique and very unusual combination of the instruments accordeon and saxophone. They’ll continue their search, but meanwhile it gave them a lot of special and exceptional repertoire. Besides original works they play transcriptions, mostly done by themselves. They perform works from different centuries of music history and of course rumba’s and tango’s won’t be absent. In the beginning of 2013 Bernard van Beurden composed a piece for accordeon and saxophone: ‘Who Knows……. Wer Weisz’ which was written for Ellen and Marijke. This year a new piece by Ad Wammes will follow. More info www.saxyon.com 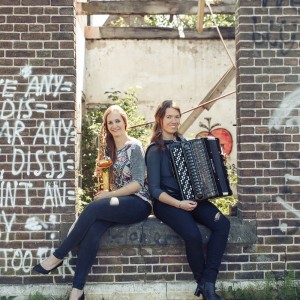 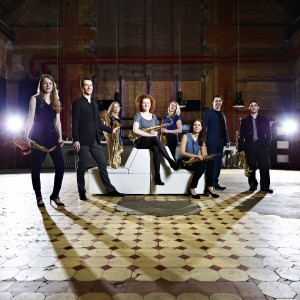 Nederlands Saxofoon Octet was formed in 2013 by eight young saxophone players. It was their dream to become a big professional saxophone ensemble and one year later they offer two beautiful programs. They received the rights from the Schönberg Foundation to arrange and perform the amazing ‘Verklärte Nacht’ by Arnold Schönberg and the same thing happened with ‘Canto Ostinato’ by Simeon ten Holt. This summer the Octet will perform during ‘Muziek op de Binnendieze ‘s Hertogenbosch’ and ‘Grachtenfestival Amsterdam’. More info www.nederlandssaxofoonoctet.com

Noota Saxophone Duo is a young an international duo formed by David Cristóbal Litago (Spanish) and Marijke Schröer (Dutch). Both saxophonists started their ‘Master of Music’ in 2009 with saxophonist Arno Bornkamp in the prestigious ‘Conservertory of Amsterdam’. In 2011 they received with succes their master of music titels. They realised concerts important concert halls of Holland and Spain like Bethaniënklooster (Amsterdam), Casa de Cultura (Villalgordo del Jucar), Sonsbeekfestival (Arnhem), Festival Terug naar het Begin (Appingedam) and live on radio4 from Festival Classique (The Hague). The duo works a lot together with pianist Jaap Wisselink in NootaXL. More info www.nootasaxophoneduo.com 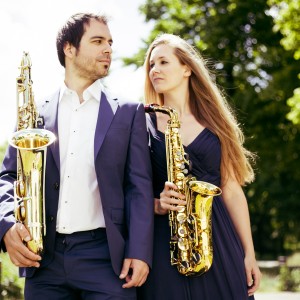 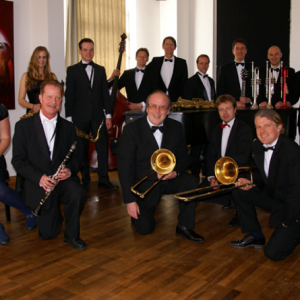 This swing orchestra mainly plays swing and dance music from the thirties and forties. The members are all graduated musicians from Holland, Germany, The United States, Poland and Russia. As well the sound as the genre of the orchestra is unique. The accent lies on a good atmosphere and a good accessibility for the audience. Swinging in the style of Fud Candrix and Jean Omer and dancing to the example of Willy Berking and Alix Combelle. Besides the orchestra plays mambo’s and related musical styles. It’s the specialism of the orchester that they sound way bigger than they are. This caused by the outstanding arrangements and high level of the musicians. They normally play in theatres and big events. More info www.rpswingorchester.de